April 22, 2021
Australia is moving from being a consumer of space technologies to being a contributor, in which new ways of transmitting and computing data are having an impact beyond Earth. For decades, the discoveries of the space program have helped catalyse business innovation around the globe; camera phones, wireless headsets, CAT scans, and more. Today, rocket scientists and astronauts also turn to the business world for tools to push the boundaries of their work. Learn how the cloud, data, IoT, artificial intelligence, machine learning, and edge computing have a crucial role in supporting important missions in the study of weather, climate science, space exploration, agriculture, national security, and disaster response; reducing costs while gathering and processing critical information with expanding speed and scale. 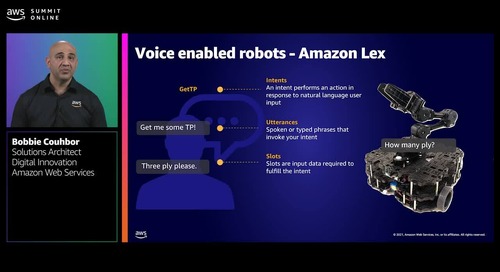 The past year has brought about a huge change in the way we live, with social distancing making us rethink ... 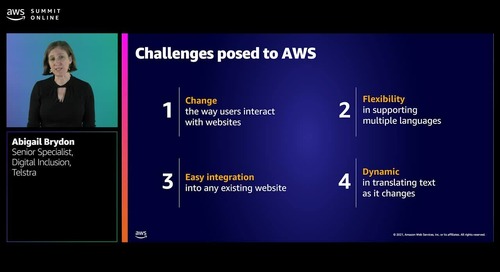 Breaking down barriers to inclusion through prototyping

Data from the Australian Bureau of Statistics tells us that 2.36 million Australians have low levels of Eng... 31:47
How to proceed with a modernization project in the enterprise JPJP
Watch Video 34:21
Backends for Frontends is serverless and easy JPJP
Watch Video 31:17
For small and medium-sized enterprises Introduction to future system development learned from how to
Watch Video 1:16:21
Special Lecture Modern application development with an eye on changes and growth in the business env
Watch Video